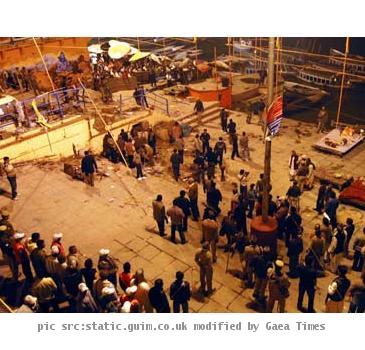 VARANASI, INDIA (GaeaTimes.com)-The Varanasi Bomb Blast which killed a child and left several others injured has sent shock waves across the nation and it marks the re emergence of terrorist activities after a period of lull. Manmohan Singh the Indian prime minister has said in his statement that the residents of India should be restrained. The explosion was caused by a bomb that was hidden in a metal canister and exploded amidst a religious gathering in the holy city. The explosion naturally created a panic at the place and a stampede ensued which left several other devotees injured. The Prime minister said in his statement “This unfortunate incident … is an attempt to weaken our resolve to fight the evil forces of terrorism.”

The responsibility for the Varanasi Bomb Blast was claimed by the Indian Mujahideen, which is an India based network of Islamic militants. The group sent a email to the media shortly after the explosion took place. The authenticity of that claim is being verified now. A girl who is two year old died from the blast. A number of others are still in hospital battling for their lives. P Chidambaram the home minister said that some foreigners were also injured in the event. The explosion was powerful and it damaged a metal railing and stones in the area.

The government of India has issued a national level alert after the Varanasi Bomb Blast. The latest report is that the cops have questioned two people in connection with the Indian Mujahideen email. However, the duo have been released as well. The metros like Delhi and Mumbai have been put on alert.

VARANASI - A walk by the river to take the mind away from the hard grind of studies led a group of c...

LUCKNOW - A poacher was arrested from Uttar Pradesh's Chandauli district with skins of tigers and a ...

VARANASI - Uttar Pradesh Police have organized a campaign from Haridwar to Varanasi to create awaren...

President's Bodyguard older than US

NEW DELHI - The President's Bodyguard, which ceremonially welcomed US President Barack Obama at the ...

WASHINGTON/MUMBAI - Ahead of US President Barack Obama's address to CEOs in Mumbai, the White House ...

NEW DELHI - As part of its bid to ensure a hassle-free train journey for people across the count...
Copyright© 2010 The Gaea Times