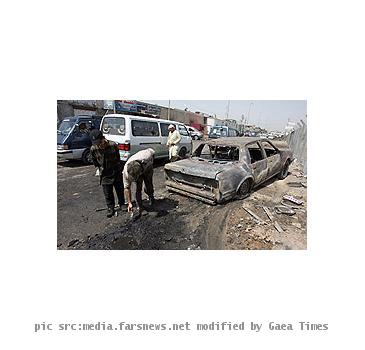 BAGHDAD, IRAQ (GaeaTimes.com)- While Baghdad is still recovering from frightful accident of two buses carrying pilgrims which claimed more than 20 lives, an unexpected bomb blast killed at least 8 Iranian pilgrims and injured more than 45 people. The incident took place near Shiite Muslim shrine where suddenly bombs exploded and killed the Iranian pilgrims. However, the law enforcement officials said that the pilgrims were killed in separate attacks.

The local media reports that five pilgrims were resting neat the Moussa al-Kadhim mosque near Shiite neighborhood of Kazimiyah. Like a bolt from the blue, two bombs exploded at that place which left the entire locality in absolute shock. Moreover, there was a bomb in a bus which was carrying three Iranian pilgrims in Shula area which is mostly dominated by Shiite community in Baghdad. These two attacks not only claimed lives but also wounded about 52 people. The injured people were immediately taken to the hospital for treatment. The law enforcement officials said that in another neighborhood of Shiite community, a car which was filled with hazardous materials suddenly exploded and it even killed three people at around 11 a.m.

However, previously the police informed that the bomb in central Baghdad killed only a passer-by. The Iraqi revolting citizens frequently attack Iranian pilgrims who enter the country to visit holy Shiite mosques and shrines in Iraq. Iraq’s Prime Minister Nuri al-Maliki has taken several steps to stop all the violence, however, despite all the efforts, these bomb blasts and violence continue to terrify the city. Northern part of Kadhamiya area in Baghdad hosts Imam Moussa al-Kadhim, a golden domes shines which attracts many pilgrims from all over the world. During a holy pilgrimage in 2005, bombing at that place claimed 1,000 lives in a stampede.

OP-ED by Vice President Jow Biden in the New York Times: "What we must do for Iraq now"

Iraqi president not to sign death order for Saddam's aide

PARIS - - Iraq's president said he will not give his approval to a death sentence for Tariq Aziz, a ...

WASHINGTON - The US Thursday called the breakthrough political agreement in Iraq a "big step" that w...

BAGHDAD - Iraq achieved a breakthrough Thursday when it named a speaker for its parliament, under a ...