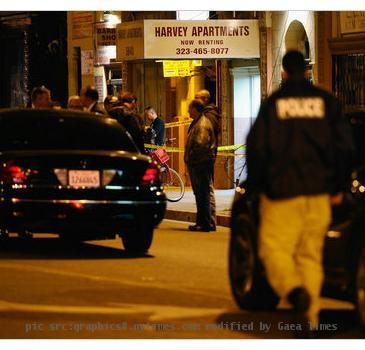 LOS ANGELES (GaeaTimes.com)- The murder case of Hollywood celebrity publicist Ronni Chasen took a brand new twist on Wednesday when a person known as the ‘person of interest’ in the murder committed suicide. According to Beverly Hills police authorities, the man, whose identity has not been released as yet, took his own life by shooting himself in the lobby of Harvey Apartments on Santa Monica Boulevard just as the cops issued a search warrant in the residential motel. The incident took place on Wednesday night just as the police had approached the motel supposedly to take the man under custody.

While revealing details of the rather shocking incident, Mitzi Grasso, a spokesperson of the Los Angeles Police Department told journalists that just as the cops were about to initiate a search in the motel, the man produced a gun and shot himself. Although authorities have described the man as a ‘person of interest’ in the slaying of the Ronni Chasen, intrinsic details of how the man is linked to the murder of the celebrity publicist has not been released to the media outlets. However, cops have confirmed that the murder case would not be halted by the death of the man and the investigation would be on to nab the culprits.

The 64-year-old well-known Hollywood publicist Ronni Chasen, was shot dead on November 16 as she was returning from the premiere of the flick “Burlesque” in her Mercedes Benz. As of now, the Los Angeles police authorities have been tight-lipped about the probe that has been undertaken while the motive behind the murder continues to remain unclear.

Murdered Hollywood publicist suspected she was being followed

NEW YORK - Hollywood publicist Ronni Chasen, who was murdered last week, suspected she was being fol...

'No One Killed Jessica' is my dramatic interpretation of case: Director

NEW DELHI - Director Rajkujmar Gupta says his forthcoming film "No One Killed Jessica" is his "own i...

NEW DELHI - Bollywood actress Rani Mukerji is tired of answering to queries about her marriage. Even...

LOS ANGELES, (GaeaTimes.com)- Every thing seemed perfect with Ronni Chasen. She was in the best ...

NEW DELHI - After "Dhoom 2" and "Jodhaa Akbar", the sizzling pair of Aishwarya Rai Bachchan and Hrit...

MUMBAI - When the band culture was fairly unknown in India, four young men decided to give Mumbai th...

Not worried about PILs against 'Guzaarish': Ronnie Screwvala

NEW DELHI - A case against "Guzaarish" has been dismissed as "frivolous" and producer Ronnie Screwva...