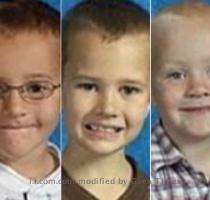 MORENCI (GaeaTimes.com)- Police have declared that the three Michigan boys who have been missing since Thanksgiving day are unlikely to be found alive. 9 year old Andrew, 7 year old Alexander and the 5 year Tanner had gone missing from the small Michigan town of Morenci since the 25th of November. Their father John Skelton has been arrested by the Morenci Police hours after police made the declaration that there is very little hope for the survival of the three little brothers.

The father of the three Michigan boys was taken into custody by the FBI agents as soon as he was released from a mental hospital in Ohio, where he was admitted after he attempted suicide on Friday. According to sources, as per the police investigations, the father has not revealed much about the missing case except for the fact that he had left the kids with a female acquaintance, who would take them to their mother. He added that he did not want his sons to be with him at the time when he would commit suicide. FBI has told to the media that the statement which John Skelton has given out is not at all trustworthy. Morenci Police Chief Larry Weeks told media that the father of the children was undergoing treatment in a Ohio mental hospital.

He went to add that till now from whatever they could make out, it is most likely that the boys are dead. However, the day saw hundreds of volunteers gathering up to search for the three lost children. They had joined hands with the police authorities, in their search for the boys all through southern Michigan and northern Ohio, without any trace of them.