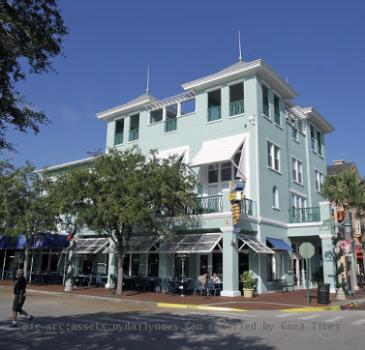 MIAMI (GaeaTimes.com)- The town Celebration built by Disney witnessed a second violent death just after few days of its first murder in 14 year history. Celebration resident Craig Foushee barricaded himself on Thursday in his home for more than 14 hours and fired shots at police. However, the eyewitnesses said that the police did not return any fire because they could not get any clear shots. After 14 hours of negotiations, when the police entered his home they found that the man died of self- inflicted gun shots.

The law enforcement officials said that the 42-year-old man Craig Foushee was in his home and the officials evacuated homes nearby, locked down schools and also closed streets for public safety. The eyewitnesses reported that on Friday morning the police threw tear gas and also send a robot to ensure that things are safe inside his home. The legal documents showed that Craig Foushee, the Disney town resident was in the middle of his divorce as his wife Kimberly Foushee filed a petition of domestic violence against him last June. The court records also show that Craig Foushee filed bankruptcy in April and the investigators say that the man was the owner of a security business, Reliant Protection Group, which was dissolved this September.

The law enforcement officials reported that the resident of Disney town, Craig Foushee wrote in the homepage of his social networking site that his greatest treasures are his daughters. Matteo Patrick Giovanditto, another Disney town resident was found dead on Monday and this unnatural death triggered investigation in the community. Twis Lizasuain, the spokesperson of the Osceola County Sheriff’s Office said that the police is still investigating the deaths.

THIRUVANANTHAPURAM - Animation major Toonz Tuesday announced that it has set up its new production u...

LONDON - Miley Cyrus was spotted in a very public clinch with new boyfriend on her 18th birthday bas...

LONDON - The next time you decide to buy those jazzy cartoon drinking glasses for your kids, better ...

WASHINGTON - While Demi Lovato is taking a break to deal with personal issues, the producers of her ...

NEW YORK - Demi Lovato's reps have denied her dad's claim that she called him from rehab, where the...

Sony is here with a caring touch for the kids. Indeed this unique remote control is sure to be a...
Copyright© 2010 The Gaea Times