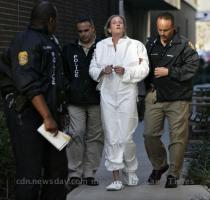 TAMPA (GaeaTimes.com)- Julie Powers Schenecker, the 50 year old mother who has been charged of killing her own children has been hospitalized. As per the latest reports, the Hillsborough County resident was admitted to the Tampa General Hospital shortly after midnight on Saturday where is undergoing a treatment for some medical condition that has not been publicly disclosed. Julie Powers Schenecker was arrested from her Tampa home on Friday morning after police reached the house to find the children dead and the mother at the back porch of the house smeared in blood.