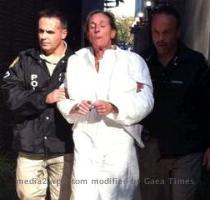 The woman committed the shocking incident while her husband, a military officer was away from home. Her husband Parker Schenecker was in Qatar while the self-imposed tragedy hit his family. He was informed of the sad news on Friday morning. During the interrogations police found out that Julie Powers Schenecker had killed her children for she could no longer bear with the teenagers who never showed any kind of respect for her. It is when Julie Powers Schenecker was taking her son for the football practice that she killed him inside the car by shooting him twice on the head. She went home and parked the car inside the garage and made her way upstairs where she found her 16-year-old daughter seating infront of the computer. She shot her straight from the back and then again in the face.

Police found the 13-year-old boy lying dead inside the vehicle while the girl lay dead in a pool of blood inside her room. The arrest was made after police was informed by Julie Powers Schenecker’s mother from Texas that something was wrong since she was not able to contact her daughter.