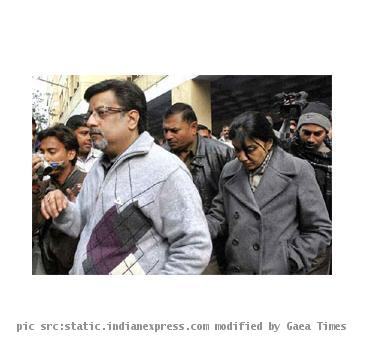 GHAZIABAD, INDIA (GaeaTimes.com)- In a sensational development the father of Aarushi Talwar, namely Rajesh Talwar has been attacked near Ghaziabad court and the assault left him bleeding extensively. The man who attacked him used a meat cleaver. The 29 year old man was later identified as Utsav Sharma. The cops said later the man was the same who had attacked tainted former DGP SPS Rathore, prime accused in Ruchika Girhotra suicide case. The attack was severe but Rajesh Talwar manged to get up from the ground after being hit. He tried to hide his face from the TV cameras and public after that. He went to the court for filing a petition asking for a new CBI probe in the murder case involving his daughter. After the dentist had filed his petition and came out of the court he was attacked. The weapon used by his attacker was also seen on the spot.

The youth was held by the security personnel and the cops took him away so that they can question him. Rajesh Talwar was taken to a regional hospital for treatment. However, the cops said that he will recover and the injury was not fatal. It is quite well known that his 14 year old daughter and Hemraj the domestic help were murdered in May 2008 in the family’s Noida apartment. The doctor was arrested after the twin murders but as investigators could not gather adequate evidence against him he was released later.

The CBI report pointed at Rajesh Talwar as the prime suspect. The Doctor and his wife have refuted the allegations so far.

HYDERABAD - The American dance group 'Bandloop' recently performed an aerial dance on the walls of...

Do You Think that India can Fulfill the Dream of 240 mn Broadband Users by 2015?

KATHMANDU - Bollywood diva Manisha Koirala, who triggered a storm of gossip about an impending divor...

NEW DELHI - Ten top fashion designers and as many acclaimed artists of the country will merge art wi...

CHENNAI - The fourth edition of Auto Serve exhibition started in Chennai to provide a platform to sh...