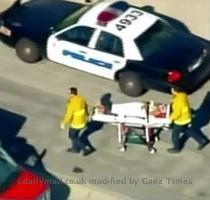 LOS ANGELES (GaeaTimes.com)- A bizarre shooting incident wreaked havoc on Tuesday at the Gardena High School after a teenager shot people in the school campus. Although some sources are claiming that atleast three people have been critically wounded due to the shooting spree, many seem to differ saying that two have been injured.

The shooting act is believed to be the act of a 16 year old boy who was a student of the Gardena High School. Through the investigation reports, it has come up that the suspect currently is under a probation for having indulged in a fight last year. A Los Angeles Fire Department spokesperson revealed that the all of a sudden shooting incident took place at 10:30 a.m at the Gardena High School, located at the 1301 W. 182nd St. Police, however, is not willing to speak anything on the shooting incident which added a severe jolt to the students and teachers of the school on Tuesday. Restless guardians were seen panicking outside the school campus which has been sealed. Although, investigators did not disclose any information about the victims, some sources are claiming that a 15 year old girl and a boy of the same age have been critically wounded.

While the 15 year old female student of the Gardena High School was shot severely at the head, the boy received was gunned down at his neck. Both are at present fighting for their lives in the hospital. Of the two, the girl is believed to be in a more critical condition. This school shooting incident is bound to remind one of the fretful shooting disaster that took place a few days back in Tucson killing six people and injuring U.S Congresswoman Gabrielle Giffords along with thirteen others.

Goal of doubling exports over five years to support millions of American jobs is on track WASHIN...

Ex-NASCAR driver back in jail hours after releaseSANTA ANA, Calif. â A former NASCAR driver was...
Copyright© 2011 The Gaea Times