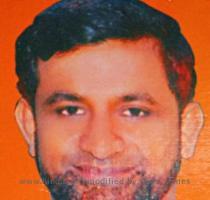 BENGALURU, INDIA (GaeaTimes.com)- Yarabnagar residents were seized with panic when a local goon turned leader was murdered in broad daylight on Sunday. 37 year old Diwan Ali was murdered in a shooting incident on Sunday afternoon when he and his friends had visited a barber’s shop for a shave. The assailant along with his gang was waiting for his target to arrive when he shot the Janata Dal Secular councilor.

From what has come out of police investigations it has been revealed that Diwan Ali was recently engaged in a feud with his old rival Mahim. Shankar Bidari, the Bangalore Police Commissioner told in an interview that the issue behind the clash was regarding a deal over a real estate. There were atleast seven men in the gang who had arrived on the spot to kill the ganglord. Although, till now there have been no charges issued against Mahim but investigators suspect that the recent feud has an attachment with the murder incident. Diwan Ali was shot near his south Bengaluru office. The gangster who has a long history of crime attached to his name had recently come out of jail after which he had contested for the corporation polls which he successfully won to become a councilor at the Bangalore city corporation.

It is being said that Diwan Ali at first was attacked with sharp lethal weapons after which bullets were fired on him. Police, however, is waiting for the postmortem reports to arrive so that they can be sure if it were the sharp weapons or the firing that actually took his life. Following the incident, most shopkeepers immediately chose to shut down the shops with residents preferring to stay indoors.

NEW DELHI - Rajasthan defeated Hyderabad by an innings and 256 runs on the third and penultimate day...

PM has assured about talking to Praful Patel on Amritsar airport: Cong lawmaker

Here's how to stay healthy in monsoon

NEW DELHI - It's monsoon time and so, enjoy the rain, but don't forget to keep the mosquitoes at bay...
Copyright© 2011 The Gaea Times