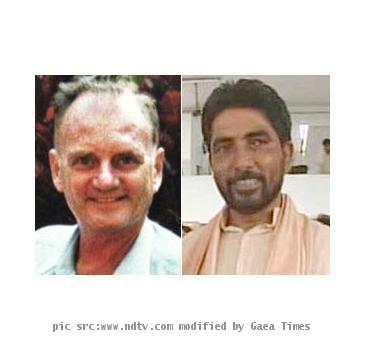 NEW DELHI, INDIA (GaeaTimes.com)- The Supreme Court rejected the CBI plea, that advocated death penalty to Dara Singh. Instead the highest judicial organization of India has declared that the prime accused of the Graham Staines murder case, should be sentenced to a lifetime imprisonment, going by the decision of the Orissa High Court.

When Graham Staines and his two minor sons, Philip, 10, and Timothy, 6 were burnt alive in a car at Manoharpur village of Koenjhar district, Orissa, in January 22, 1999, the Christians were extremely agitated and demanded an exemplary punishment for Dara Singh and his companion Mahendra Hembram, both of whom were reportedly linked with the Bajrang Dal. Just after 12 years, when the final verdict was declared by the Supreme court, the Christian organizations happily accepted the decision of the judges. Archbishop Raphael Cheenath of Cuttack/ Bhubaneshwar said that the Christian communities have already forgiven Dara Singh, while at the same time, they have happily accepted the punishment declared by the Supreme Court. Sajan K George, the president of Bangalore chapter’s Global Council of Indian Christians said that they appreciate the decision of the judges, while hoping that this hearing would prevent the repeatation of such brutal murder in the future. Even the Hindu leaders seem to be satisfied with the judgments of the Supreme Court. Subhash Chouhan, of Bajrang Dal said that people have full faith of the India Judiciary and they accept the final judgment of the court.

However, amongst all, CBI seems to be quite dissatisfied with the decision of the Supreme Court. CBI’s counsel and Additional Solicitor General Vivek Tankha, told the bench on December 15 last year that Dara Singh has committed the crime in a “diabolic and dastardly manner” and therefore he deserves a death sentence. However the Supreme court refused to abide by the plea of the CBI.

Bats crash more often when they use vision

WASHINGTON - New research says that wild bats that use their vision to fly short distances are more...

NEW DELHI - The Supreme Court Thursday was told that the 1999 lynching of Australian missionary Grah...

Excitement on bookshelf with arms, new writers and history (IANS Books This Week)

NEW DELHI - Spend the weekend with a load of exciting and profound books. 1. Book: "Arming ...

He took Obamas down the passages of history

NEW DELHI - As US President Barack Obama and his wife Michelle Obama strolled around the sprawling H...

LAHORE - Youngsters from India and Pakistan should be given opportunities to regularly interact with...

ISLAMABAD - While the Indo-Pak political relationship remains edgy; nothing deterred a delegation of...