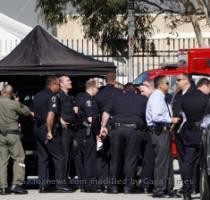 LOS ANGELES (GaeaTimes.com)- Even though panic seized students and their parents after the shooting incident took place at the Gardena High School, friends and classmates of the suspected teenager claim that their friend is not someone who would do anything like that willingly. From what has come up from the classmates of the suspect, it was clear that the boy earlier had also brought a gun with him to school.

Andrea Tibbs who claims herself to be a good friend of the suspected boy told the investigators that the boy would often carry a gun with him to school but he never had the intention to harm any one. The reason that the suspect’s friend gave out suggest that the boy would carry the arm with him in order to protect himself. She added that ever since the boy had been involved in a fight outside the Gardena High School, he would remain in fear which is why he would bring a gun to mark his safety. Imami Moses, another friend of the suspect claimed that it was unusual that the suspect can do anything like this for he apparently seems to be very ‘cool’. Another classmate Para Ross said that the teenager is a sweetheart who would always appeared with a smile on his face and used to hug people.

Police, however, has said that they will be framing charges of assault against the boy for carrying a deadly weapon to Gardena High School. the student after a dramatic ending himself came up and surrendered to the police. Police suspect that the shooting resulted when the gun had got accidentally discharged. They think someone might have bumped onto the bag containing the weapon.

Goal of doubling exports over five years to support millions of American jobs is on track WASHIN...

Ex-NASCAR driver back in jail hours after releaseSANTA ANA, Calif. â A former NASCAR driver was...
Copyright© 2011 The Gaea Times