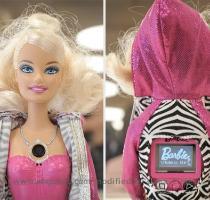 SAN FRANCISCO (GaeaTimes.com)- The Barbie doll which is a big asset for all the little girls is having its tryst with the law after FBI issued out warning notices with regard to the latest “Barbie Video Girl”. The doll which has a secret camera hidden inside its body stirred uproar after an individual convicted of child pornography was found to give the “Barbie Video Girl” to a six year old child. However, later investigations saw no such threat in that particular doll distribution case.

After this incident FBI issued warning notices that the new tech doll could be a probable tool used by the pedophiles for child pornography. Ever since then Barbie makers, Mattel have been experiencing some kind of unrest regarding their market sales for such a grave issue is likely to decrease the sales. This particular doll which was launched in July this year has a LCD screen on its back. Inside the doll’s necklace a camera lens has been inserted carefully which captures the footage. This secret camera is now posing a threat to the FBI. The doll has been priced for $49.99.

The “Barbie Video Girl” has a capacity to record footages upto 30 minutes at a stretch. The doll can be connected to a TV or computer through a cable. Little girls can have no better gifts this Christmas season than this doll. However, with this controversy the question of the doll as a present has come up a headache for the parents who are in a duality as to whether they buy it or not. Inspite of no such reports of crime FBI thought it to be wise to issue a notice beforehand.

New Barbie with hidden camera branded a "gift to paedophiles"

LONDON - Child protection experts have branded a new Barbie doll that features a hidden camera a...

LONDON - Singer Lady Gaga displayed her crazy streak when she ripped the head off a Barbie doll duri...

LONDON - Christmas is set to go digital this year, with kids ditching traditional train sets and do...

Melbourne, 0ct 21 (ANI): A Barbie with jewels designed by Australia's Stefano Caturi, believed to b...

World's most expensive Barbie up for grabs at $500K

LONDON - A custom-designed Barbie, wearing a necklace featuring a one-carat pink diamond, is to be a...