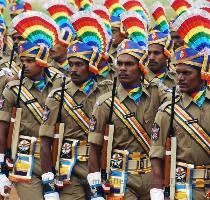 HYDERABAD, INDIA (GaeaTimes.com)- The Andhra Pradesh Police department once again emerged triumphant over the atrocities of the Maoists in the area. They encountered a group of Maoists in the Cherrvuru village of Chintapalli mandal, after a fierce exchange of fire between the cadres of the extremist groups and the police.

This fierce firing continued for about 10 minutes at a stretch, which took the life of two women cadres of the Maoist group too. Visakhapatnam District Superintendent of Police Vineet Brijlal said that the Maoists were asked to surrender themselves to the Andhra Pradesh Police, but they fired back at them. The police had no other options but to fire back at them at the cost of the life of the two women cadres. The police have already sent the dead bodies for autopsy to a nearby hospital in Narsipatnam. However, right on the next day, these militant groups dispersed themselves to make the AP Police call for an extensive search operation all over the area. Vineet Brijlal also believes that their could be possibilities of a few more death cases as a result of the encounter, but the bodies might have washed away in the nearby river.

In the last few days the Andhra Pradesh Police have made their operations more stringent at the Chintapalli mandal in the Visakhapatnam district. This area lies very near to the Orissa border and is therefore a good strategic point to escape the wrath of the police. After the fierce fighting between the two groups yesterday, the police discovered a huge amount of explosives. It is expected that yet another sixty cadres would be hunted from that area if the search is intensified by the police.

The Results of the auctions of 10-year State Development Loans, 2020 for Four State Governm...

RAIPUR - The number of patients suffering from sickle cell anaemia - a form of blood disorder - are ...

Nobody has asked me to resign: Yeddyurappa

Rosaiah to leave for Delhi amid speculations of change