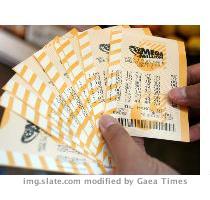 MICHIGAN CITY (GaeaTimes.com)- A 22 year old Michigan City woman has been sentenced for probation where she will be kept under observation after she pleaded guilty of lottery theft charges. On Wednesday Tiffany Borolov pleaded guilty in a La Porte Circuit Court after she was accused of stealing a big amount of cash in the form of lottery tickets. She used to work in a store called East Side Produce at 4666 W. Her employer had caught her guilty after he saw her committing the crime through a store surveillance video.

According to sources, the court as of now has given Tiffany Borolov the verdict of being in probation for a period of 455 days during which she will be monitored for 90 days. A source claimed that the young lady will not be taken to jail but will be under house arrest where she will be electronically monitored. Charges have been levied against her that she stole an amount of more than $21,000 from the Michigan City store. Her employer Mike Mussa revealed that he was not aware of this darker side of Tiffany Borolov until one day he saw the footage where he saw her doing this crime of stealing lottery tickets.

Investigations of the Michigan City police reveal that she took the help of a scanning device which helped her in making out as to which were the winners. She did not even had to scratch the lottery tickets off fully. It has come up that Tiffany Borolov took 260 lottery tickets in a single shift , out of which 15 were the winning ones. After this to avoid any suspicion she slyly resorted to the usual store procedures to collect the payoffs.

WASHINGTON - A new study has suggested that late-preterm babies, those born between 34 and 36 weeks,...

MELBOURNE - A security-check at Detroit Metropolitan Airport left a traveller covered in his own uri...

CHANDIGARH - From selling candles and fabric to teaching computers and from establishing an oversea...

WASHINGTON - The chief curator of Denver Museum of Nature and Science has called the accidental ...

WASHINGTON - Scientists have said that patients undergoing plastic or reconstructive surgery should ...

Remarks by the First Lady at "Let's Move!" Student Event