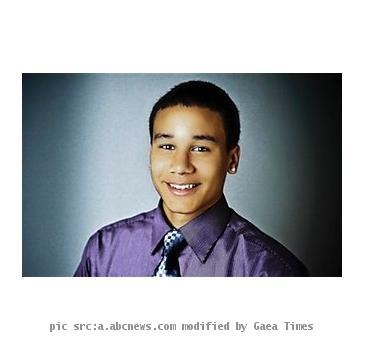 OMAHA (GaeaTimes.com)- Robert Butler Jr., a 17 year old student shot two officials at Millard South High School in Omaha on Wednesday. The student was the son of a police detective Omaha Police Det. Robert Butler and he used to study in the same school. Omaha police chief Alex Hayes said that the student’s body is later found in a car, miles away from the school. The law enforcement officials said that no other student was injured or wounded in the rampage.

Omaha Police Officer Michael Pecha told that the assistant principal of the school, Vicki Kaspar was also wounded in that incident and she passed away in the evening at the hospital. Curtis Case, the principal of the was also wounded but police says that he is in a stable condition now at Creighton University Hospital. Laura Olson, a student of the school told a reputed media source that the their principal was “yelling”. She said that Curtis Case was waving his arms and he asked everyone to get into the kitchen for their safety. The school was locked down after the shooting incident by Robert Butler Jr.

Police spokesman said that Robert Butler Jr. died of a self-inflicted gunshot wound. Though police has declined to comment anything about the cause of this shooting, the media outlets reported that perhaps he was not satisfied with the new city. Before the shooting incident, Robert Butler Jr. took to his social networking site to express his disappointment for his new school and the city. In his post, he, reportedly, stated that his new school has changed him completely. However, apologized and stated that he wants to be remembered by people for who he was before affecting the families he “ruined”.

WASHINGTON - As dozens of images taken by full-body scanners at airports leaked on internet, the US ...

CANBERRA - The Australian Government wants to know what more can be done to stamp out the practice...

George Clooney may star in 'The Man From U.N.C.L.E'

LONDON - George Clooney is reportedly in talks to play Napoleon Solo in a big screen adaptation of '...

Facebook-addict crooks make it easier for US cops

NEW YORK - Criminals in the US are bragging about their murders, rapes and robberies on social netwo...

Stem cell therapy could 'help the blind see within 6 weeks'

1 in 5 Brits think Oliver Twist was written by Charles Darwin!

LONDON - A revolutionary technique that could restore sight to the blind and prevent others from los...
Copyright© 2011 The Gaea Times