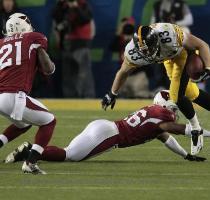 Investigators strongly suspect that it was Frank Tanori Gonzalez who was responsible for the pornographic clip named “Wild Cherries 5″ that had come in the middle of the Super Bowl game in 2009. Two years back, thousands of viewers had no clue about what they would see next on their television screens as they indulged in watching the football action. All of a sudden, a hard core porn clip appeared on the screen lasting for a full length of 37 seconds leaving viewers in a state of shock. The viewers had no clue from where did the odd thing appear while a game was on going, neither did cable provider Comcast, who were transmitting the broadcast, had the slightest clue about the incident. The matter was handed over for police investigation.

Comcast reported that the clip appeared on the screens of thousands of viewers in suburban Tucson who were watching the Super Bowl game on a low- definition service. The incident even led Comcast to offer a $10 credit to all their 80,000 subscribers, no matter whether all of them had seen the porn clip or not. Police, however, is tight-lipped about how they managed to nab Frank Tanori Gonzalez. Although it remains unknown if Frank Tanori Gonzalez has an attorney for himself or not, sources have reported that the suspect was an employee at the Cox Communications where he was acting as the supervisor at the time of the incident.

Super-speciality hospital to come up in Himachal

MUMBAI - Builders in Maharashtra Tuesday asked the state government to remove discrepancies in the D...

KATHMANDU - Bollywood diva Manisha Koirala, who triggered a storm of gossip about an impending divor...

TOKYO, JAPAN (GaeaTimes.com ) -- Although the company is going through a bad phase in this year,...

Not only that she looks fabulous and gets to wear so many super clothes, but this girl surely knows ...