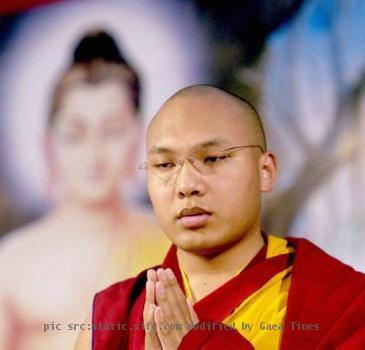 DHARAMSALA, INDIA (GaeaTimes.com)- After currency worth crores were recovered from the Gyatso monastery of the 17th Karmapa, Ogyen Trinley Dorje earlier this week, the Tibetan leader was questioned by the Himachal Pradesh police authorities to get vital clue relating to the case. As the raids in a number of other monasteries across the Indo-China border continues in full swing, the Karmapa Lama was interrogated by the officials of the Intelligence Bureau (IB) as well as the Research and Analysis Wing (RAW) at the monk’s Sidhbari ashram located near the city of Dharamsala.

While revealing details of the case to the media, a senior official in New Delhi stated that the office of the trust run by the Karmapa as well as his ashram in Sidhbari have been thoroughly searched to retrieve other currencies that have been kept at the monastery. The official further added that the officials of the Enforcement Directorate have been updated about the case as they would be investigating the issue in relation to the foreign currency that have been recovered from the monastery. However, the official refuted reports that the 17th Karmapa might be taken into custody while adding that the Tibetan leader has extended his full cooperation to the authorities.

Meanwhile, Dalai Lama has responded to the case by saying that the Karmapa is a revered monk and explained that the money must have been given to him by his disciples although he noted that keeping the money with him indeed ’sends wrong signals.’ Officials in Dharamsala have divulged that a city-based businessman and hotelier KP Bhardwaj has been arrested in connection to the case as he is presumed to have sealed a land deal with the Karmapa trust.

India says no to US tour of Tibetan monk

DHARAMSALA - India has denied permission to Ogyen Trinley Dorje, the 17th Karmapa who is the third m...

At a Tibetan precipice: With the Dalai Lama nearly 75, what happens after he dies?

What happens when the Dalai Lama dies?DHARMSALA, INDIA â The question looms over this raggedy h...

RUMTEK - The traditional mask dance performed by Buddhist monks at a monastery in Rumtek in S...

PATNA/NEW DELHI - Thousands of Buddhists from all over the world, including the Dalai Lama and the K...

800 monks to pray in Delhi for Buddha Purnima