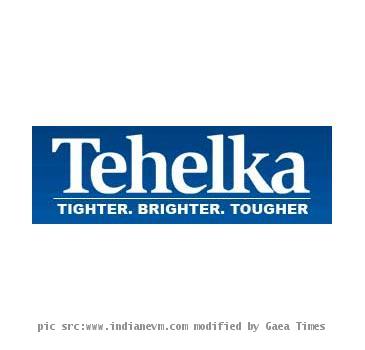 NEW DELHI, INDIA (GaeaTimes.com)- The Tehelka Magazine, revealed the names of 15 individuals, including three trusts, who “had stashed black money” in LGT Bank in Liechtenstein, to evade taxes. This bank is situated 190 kilometers away from Munich, and is known as a famous Tax haven. Although the Tehelka Magazine got 16 of the 18 names, they revealed the names of 15 so far.

The Tehelka Magazine said that they are issuing the names of 15 people including a few trusts in the website, without revealing their addresses and other business details. It also refused to declare the exact amount of money that was involved in the scam by these individuals. Each of them had their own accounts in the bank. Most of them are business entrepreneurs based in India. Although they tried to contact them, none of them were available for any comments, and therefore the magazine had to hold back the other details. It has also said that it would declare the other names and details too, once they respond to their verification. One person, whose name the magazine has not revealed, is reportedly a renowned politician. Twelve individuals, who were involved in the scam are Manoj Dhupalia, Rupla Dhupalia, Mohan Dhupalia, Hasmukh Gandhi, Chintan Gandhi, Dilip Mehta , Arun Mehta, Gunwanti Mehta, Rajnikant Mehta, Prabodh Mehta, Arun Koohar and Ashok Jaipuria. While the names of the three trusts are Urvasi Foundation, Raj Foundation and Ambunova Trust.

Reportedly, in March 18, 2009, the Government of Germany, handed over the lists of these people to the Indian Government, but Finance Minster, Pranab Mukherjee, refused to disclose the names of these people, as the Germany demanded confidentiality for further investigation. The Income -Tax Department has ordered these individuals top pay up the evaded money to the Indian Government. Central Board of Direct Taxes conducted an investigation to conclude, that these individuals close to completion, and would soon be prosecuted under the clauses of the Income Tax act. Tehelka Magazine Will soon reveal the other details.

2G scam: CAG report to be tabled in Parliament today

NEW DELHI - The Comptroller and Auditor General (CAG) report on the 2G spectrum allocation is expect...

From Raja's scalp to JPC demand - UPA-opposition battle hots up

NEW DELHI - If the government was hoping to quieten the opposition with the ouster of A. Raja as tel...

All parties meet to end impasse over 2G scam

NEW DELHI - Finance Minister Pranab Mukherjee on Monday called for a meeting of all major political ...

NEW DELHI - Maintaining its stand of not commenting on Telecom Minister A. Raja's involvement in the...

Is it a curse that's hit Mangalore? Why is it so much in the news in just the last two years for all...

'Rent-a-riot' Muthalik pays for his fanaticism (Letter from Bangalore)

BANGALORE - Pramod Muthalik, the self-appointed Hindutva protector, has been thriving on controversi...
Copyright© 2011 The Gaea Times