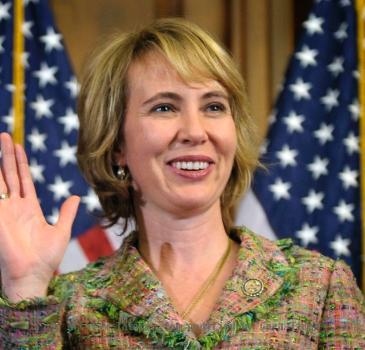 TUCSON (GaeaTimes.com)- Like a bolt from the blue, open fire at a busy supermarket in Arizona on Saturday left six people dead and Congresswoman Gabrielle Giffords severely wounded. Sheriff Clarence Dupnik said that the Congresswoman was the prime target of the shooting and the gunman shot her in the head. However, the doctors are of the opinion that though she is in a critical condition, she is likely to recover soon.

United States’ President Barack Obama strongly condemned the Arizona shooting and said that the incident is surely a tragedy for the whole country. The law enforcement officials said that other than Gabrielle Giffords, 13 other people were shot. Police said that they have arrested the suspect Jared Loughner, 22, after the gory incident. Clarence Dupnik, Pima County Sheriff told a reputed media source that though they have arrested the suspect, they assume that he did not act alone in the whole affair.

An eyewitness reported that the whole rampage was shocking enough and the suspect began firing everywhere. The eyewitness said that the whole incident took place within 12 to 15 seconds and it left many people dead and wounded. President Barack Obama has asked the nation to support each other and come together during this difficult time. About Gabrielle Giffords, the President said that she was his friend and an exceptional public servant. In his statement, the President asked all the Americans to join him and the First Lady in keeping the victims along with their families in their prayers and thoughts while they deal with their difficult time. Vice President Joe Biden expressed his sadness at such an unfortunate incident and said that Gabrielle Giffords is one of the “finest” Congress members he has ever known.

Harry Potter series 'inspiring fans to create their own art'

WASHINGTON - The Harry Potter series may be coming to an end, but it has inspired many of its fans t...

LOS ANGELES (GaeaTimes.com)- There is some really disappointing news for all the regular viewers...

LONDON - Actress Eva Longoria Parker says she was cast in "Desperate Housewives" by creator of the s...

Cosgrove Signs On For Neutrogena

Bopanna-Qureshi in US open third round