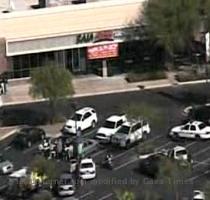 CHANDLER (GaeaTimes.com)- Shoppers present at a local mall in suburban Phoenix had a harrowing experience due to the crime operation that took place on Wednesday. Chandler police who were looking for a notorious fugitive had mistaken another man for him as a result of which it was all hell broke loose at the spot. The man later on identified as Adam Hernandez was taken in police custody on Wednesday afternoon. Panic seized everyone present there after shooting rounds followed in between the 27 year old and police.

After the situation was brought under control Chandler police authorities divulged that they were actually looking a fugitive named Daniel Munoz Perez who bore resemblance in many ways with Adam Hernandez, whom the officials were actually searching for. Adam Hernandez on seeing police after him fled inside the mall. The worst part was that he had also taken two other with him as hostages and barricaded himself. The situation worsened and police decided to lockdown the mall for around five hours. According to sources, all the customers and employees were evacuated from the shopping complex so that the rescue operation could be carried out without any harm. There followed rounds of shooting from both the sides.

After several hours of the incident, Adam Hernandez himself came up and surrendered himself. The two who were taken as hostages were also released unharmed. Police, however, refused to disclose any information about Adam Hernandez. The Chandler Fashion Center mall was restored minutes after the confusion was resolved. Police are actually searching for Daniel Munoz Perez who is wanted for shooting officials at the Arizona Department of Public Safety last month.

LONDON - Yacht couple Paul and Rachel Chandler, who were held by land-based pirates for 388 days, af...

LONDON - A study of peak-time British programme has indicated that television dramas too often portr...

We are bony but fine: British couple after kidnap ordeal

LONDON - "We are rather skinny and bony but we're fine," said a British couple after their release b...

LONDON - After 13 months of torment in the clutches of Somali pirates, a British yacht couple-Paul a...

LONDON - Somalian pirates have freed Kent couple Paul and Rachel Chandler 388 days after they were k...

MOGADISHU - A British couple held captive by pirates in Somalia for more than a year was released Su...

LONDON - Actress Jennifer Love Hewitt has been quietly ignoring rumours that she is dating actor Ale...

JFK told Secret Service to back off days before Dallas assassination

WASHINGTON - Former US President John F. Kennedy told his secret service agents to give him space to...