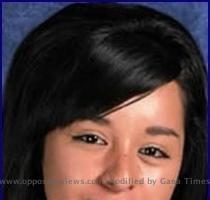 MORENO VALLEY (GaeaTimes.com)- An unidentified body was found two miles away from Norma Lopez’s site of abduction yesterday and the police is in a fix as they cannot identify the body. The Moreno Valley girl Norma Lopez was reported missing from last week. The police suspected it to be a case of abduction as they discovered personal items belonging to Norma Lopez scattered along the route.

Norma Lopez a 17 year old girl was reported missing from last Thursday in her way back home from her Valley View High School and the authorities triggered a massive search throughout the Riverside Country for the missing teen. From the Riverside County Sheriff’s Department Sgt. Joe Borja said that the police could not confirm the gender of the body and the investigations are still in process regarding the identification. The remains of the body were found in a remote farming area around Dracaea Avenue and Thedore street at the east of Moreno Valley. The Police and FBI are still in search of the green SUV which was seen near the field at the time of her disappearance.

The FBI investigators have also interrogated Norma Lopez’s school friends and other acquaintances but are still left clueless. Sgt. Joe Borja said that they have contacted every friend, relative and everybody available that they could but there was no information that would lead them to believe that she was a “runaway”. The family of the missing girl is still hopeful and they have declared a reward of $35,000 for her information. However, an autopsy is scheduled for this unidentified body on Wednesday to clear the haze of doubts about the body.