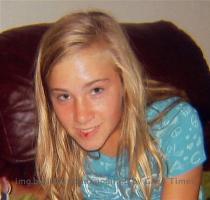 MOUNT VERNON, (GaeaTimes.com)- Thirteen year old Sarah Maynard, the Ohio teen who has been missing with her family since Wednesday, was rescued from a home at Mount Vernon home in Ohio on Sunday morning at around 8:00 AM. The house belonged to 30 year old Matthew Hoffman. However, the three other companions, who have also been missing with her, from Apple Valley, are yet to be found.

Knox County Sheriff’s Office and the Mount Vernon Police Department’s Emergency Services Unit raided Matthew Hoffman’s home in 49 Columbus Road, in the early morning on Sunday. Fortunately, they found Sarah Maynard bound and gagged, in the same place. Knox County Sheriff David Barber said that she is fine right now without any evidences of physical harm or torture. However, her mother, Tina Herrmann, 32; her brother Kody Maynard, 10; and Tina Herrmann’s friend- Stephanie Sprang, 41, are still missing, and were not found in that house. Matthew Hoffman, who was at home when the raid took place, was taken into the custody at the Knox County Jail and was charged for kidnapping, while Sarah Maynard, who was retained in the basement of his house, against her will was taken to the hospital for evaluation. Later on she was shifted to the Nationwide Children’s Hospital in Columbus. David Barber said that Sarah Maynard was under the criminal’s control since Wednesday. The criminal refused to cooperate with the police, while the initial interview with Sarah Maynard was not revealed to the media, for a better execution of the investigation.

The police said that that Matthew Hoffman has past criminal records and was previously convicted for a arson case in Colorado, for which he was even sentenced to imprisonment. However, they are not sure what connection did the criminal have with the family of Sarah Maynard. Matthew Hoffman neighbors have reported that he was a bit weird and harmful.

Nearly half of US voters don't want Obama in 2012

WASHINGTON - Nearly half of the voters in the US say President Barack Obama does not deserve a secon...

WASHINGTON (GaeaTimes.com)- If Sarah Palin indeed goes ahead with her 2012 U.S. presidential bid...

MELBOURNE - Jon Bon Jovi is set to take the stage for 300 guests being flown out for Oprah Winfrey'...

WASHINGTON - A federal judge ordered Gawker to take down excerpts the website posted from Sarah Pal...
Copyright© 2010 The Gaea Times