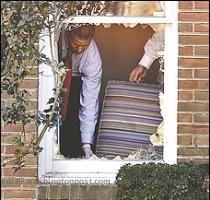 WASHINGTON D.C., (GaeaTimes.com)- Jack Johnson, the Prince George’s County Executive and his wife Leslie Johnson were arrested yesterday morning. The police raided the couple’s residence yesterday to get certain evidences regarding his involvement in taking money from certain real estates developers in order to pass their contracts.

As the FBI raided his home, Leslie Johnson called up her husband who was not at home at that time. she was talking about a check of $100,000, which was hidden in a box of liquor. Jack Johnson asked his wife to flush it off in the toilet, and hide a cash money of $80,000 in her underwear. Unfortunately the police heard the entire conversation and the two got arrested. The money was allegedly taken from the real estate developers. The two were charged with tampering with evidence and destruction of records. The two were released on own recognizance and will have to wear a monitoring device. He can also continue his last one week of remaining term as the County Executive, however he cannot attempt to destroy any evidence.

This case actually started in 2006, when the FBI came to know that Jack Johnson is accepting bribes from the developers to pass their contract. This led to a number of authorizations for the interception of wire communications. On Friday they came to know that he has received a $15,000 payoff, and they visited his house for a clarification. The entire conversation between Leslie Johnson and Jack Johnson made it clear that many of his previous statements were false. He initially said that the money was for a party to mark the end of his tenure and that he had never received any money from the real estate bidders. Moreover, the destruction of the $100,000 check more them more guilty and got them arrested.