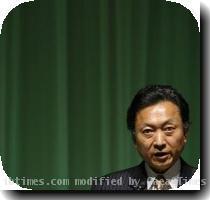 Kan, 63, would succeed the unpopular Yukio Hatoyama, who stepped two days earlier amid plunging approval ratings over broken campaign promises and a political funding scandal. Because the Democratic Party of Japan controls the more powerful lower house of parliament, Kan was virtually certain to be chosen as prime minister by lawmakers later in the day.

Kan defeated little-known Shinji Tarutoko, chairman of the lower house environmental committee, by a vote of 291-129, with two invalid ballots.

As prime minister, Kan will face daunting choices in how to lead the world’s second-largest economy, which is burdened with massive public debt, sluggish growth and an aging, shrinking population. He must also rally voter support ahead of upper house elections that are due next month.

Kan told fellow party members ahead of the vote that they need to deal with “money politics” and come clean.

“I will do my utmost, taking up the baton from Prime Minister Hatoyama,” he said in his speech. “Our first priority is to regain the trust of the people.”

On foreign policy, he described Japan’s relationship with the U.S. as the cornerstone of Japanese diplomacy, but stressed the importance of Japan’s ties with regional neighbors.

“With the U.S.-Japan alliance the cornerstone of our diplomacy, we must also work for the prosperity of the Asian region,” he said in a speech.

In a written candidate’s statement Friday, Kan identified economic recovery and growth as Japan’s biggest challenge. Japan is the slowest growing economy in Asia, and will almost certainly be overtaken in size by China sometime this year. While exports and factory output are rising, unemployment and deflation are worsening.

“I will tackle and pull Japan out of deflation through comprehensive measures from the government and the Bank of Japan,” he said in the statement, hinting that he would seek greater cooperation from the central bank.

Kan is seen by many analysts as the DPJ’s best hope for restoring confidence in its ability to govern and deliver a viable roadmap for the future.

“I grew up in a typical Japanese salaryman’s family,” Kan said at a news conference Thursday. “I’ve had no special connections. If I can take on a major role starting from such an ordinary background, that would be a very positive thing for Japanese politics.”

Kan gained popularity in 1996 as health minister when he exposed a government cover-up of HIV-tainted blood products that caused thousands of hemophilia patients to contract the virus that causes AIDS. During an E-coli outbreak that hit sprout growers hard, he appeared on national television and ate sprouts to dispel rumors that they were unsafe.

ISLAMABAD - Despite stiff opposition from allied parties and the opposition, the Pakistan government...

NEW DELHI - The eight successive days of adjournment of parliament without any major business trans...

NEW DELHI - The Supreme Court on Tuesday examined the affidavit filed on behalf of the Prime Minist...

NEW DELHI - Both Houses of Parliament were adjourned till noon within minutes of opening amid an Op...

NEW DELHI - The Supreme Court will on Tuesday examine the affidavit filed on behalf of Prime Ministe...