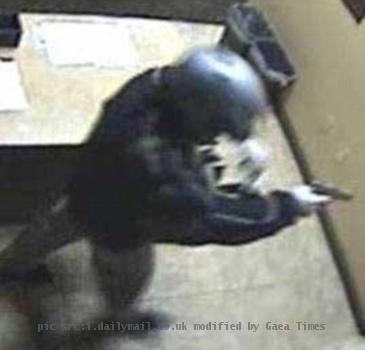 LAS VEGAS (GaeaTimes.com)- The law enforcement officials are presently searching for a helmet wearing gunman who robbed off one of the most popular Las Vegas casino, near Bellagio Tuesday morning. The robber took about $1.5 million in casino chips. This robbery has left everyone in a state of utter shock as the media outlets are questioning the safety of casinos of Las Vegas.

The law enforcement officials reported that the robber was wearing a helmet to hide his face and he was on a motorcycle. He reached Bellagio casino at around 3:50 a.m. and then pulled his gun to rob off things. Lt. Clint Nichols of the Las Vegas Metropolitan Police Department said that the gunman was holding the gun on his hand and threatened everyone not to move. The robber then he started taking the casino chips that were on the table. The police said that the man then ran back and rode away. Lt. Clint Nichols said that luckily, no one was injured in the robbery.

The law enforcement officials are assuming that the gunman might be the same person who robbed Suncoast Hotel & Casino near Bellagio on Thursday. The police said that in that incident, the robber was wearing a motorcycle helmet and took about $20,000 in cash. However, the Las Vegas police has released surveillance images and videos of both the robberies. Police says that the video shows a man wearing white striped black helmet, black pants, black jacket, black gloves. The gunman is about 5 feet 10 inches to 6 feet tall. The images of Suncoast Hotel & Casino shows that the man wearing dark clothes and silver helmet.

Cosmopolitan in Vegas 1 step from gambling licenseLAS VEGAS â The $3.9 billion Cosmopolitan of ...

GHOST WHISPERER star JAMIE KENNEDY is breathing a sigh of relief after his lost wallet was returned ...

No casino at new Mandarin Oriental in MacauNEW YORK â Macau is one of the world's premier gambl...

Shane West celebrates 32nd b'day with a gaggle of girls

NEW YORK - Shane West-known for his role as Mandy Moore's love interest in 'A Walk To Remember' ...