Viktor Bout To Be Extradited? 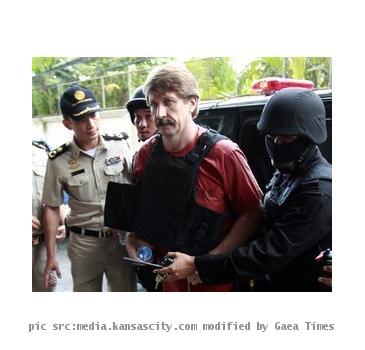 BANGKOK, THAILAND (GaeaTimes.com)- In a recent development a court in Thailand has decided to drop the charges of wire fraud and money laundering against well known weapon smuggler Viktor Bout. The criminal whose extradition to the USA has been deferred for long can now be sent there. The final obstacle to his extradition is no longer there. Viktor Bout is known as one of the most high profile arms dealers and he was jailed in Bangkok two years back. Since his arrest the USA is pushing for his trial to be held on the US soil. He was set to be extradited in August but the process was delayed owing to the additional charges slapped against him by USA.

The Bangkok Criminal Court made it clear on Tuesday that it wanted to drop the charges against Viktor Bout for lack of proof and formalities. However, the lawyer of the Russian criminal said that he will appeal against the verdict so that he could be kept in Bangkok. Needless to say the case on Viktor Bout has resulted in the formation of a diplomatic tussle between the USA and Russia. The USA has long accused the former Soviet air force officer of operating an air cargo chain used to drop weapons in several militancy afflicted countries across the world. Viktor Bout has denied the allegations on his part saying that US undercover agents framed him.

Viktor Bout faces several charges slapped by USA which include conspiracy to kill US nationals and employees. Bangkok is treading cautiously on the issue since both the USA and Russia are keen to get their hands on the wanted arms dealer.

Russian arms dealer extradited to US

Bopanna-Qureshi knocked out of Kremlin Cup

MOSCOW - Top seeds Rohan Bopanna of India and Aisam-Ul-Haq Qureshi of Pakistan crashed out of th...

Moscow, Oct 17 (IANS/RIA Novosti) At least 11 people were killed due to flooding in southern Russia ...