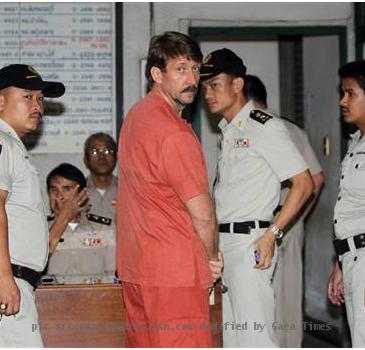 BANGKOK( GaeaTimes.com)- A Thailand court ruled on Friday to extradite infamous Russian criminal Viktor Bout for arm smuggling charges to the United States. The person is called the merchant of death and both Russia and the USA have been trying for a long time to get him to their territories. The decision of the appeals court overturns the verdict of a lower court that rejected the US plea for the extradition of the smuggler. As per the new verdict Viktor Bout should be extradited to the USA within 3 months or else he would be allowed to return to Russia.

Viktor Bout used to be an officer in the former Soviet air force and he is now 43 years old. He is accused of supplying weapons that were employed in civil wars in Middle East and Africa and South America. He allegedly supplied arms to Charles Taylor of Liberia and Moammar Gadhafi of Libya. His wife slammed the court verdict and said it was unfair to her husband. The ex air force officer says that it is a frame up of the USA. Whether his claims are true or not it is undeniable that the case triggered a diplomatic cold war between Washington and Moscow with each side trying to get him first.

The veterans are of the opinion that Russia wants Viktor Bout since he used to be useful for intelligence apparatus of Russia. Lak Nittiwattanawichan the lawyer of Viktor Bout also criticized the verdict and also said that he would challenge the extradition to USA. He said that he will approach the Ministry of Foreign Affairs.