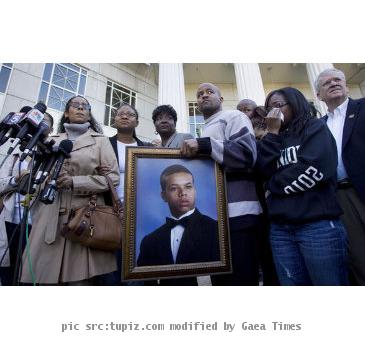 ATLANTA (GaeaTimes.com)- Bobby Tillman, an 18 year old boy was beaten to death last Saturday by four other teens outside his home in Atlanta, Georgia. A reputed media source reported that the barbaric killing took place when one of the teens said that he would start a fight with the next person who passes by the road. Horace Coleman, Emanuel Boykins, Quantez Mallory and Tracen Franklin are charged with one count of felony murder. The teenagers appeared in court on Monday morning.

Bobby Tillman’s mother Monique Rivarde said that her son was a “silent hero” and he did not die in vain. She said “something” needs to be done for these children who attack each other for nothing. Lt. Bruce Ferguson, of the Douglas County Sheriff’s Office said that the accused were arrested after emergency services were called to the party in the early hours of Sunday morning. Douglas County District Attorney David McDade said that the fight was absolutely “unprovoked” and a senseless killing by youngsters without any motive.

Monique Rivarde later said that his son was his best friend and he was an “angel” on earth. The grieving mother asked for justice for her son and said that she hopes the accused boys spend their entire life in prison for what they did. D.A. David McDade said that nobody would know why the senseless killing of Bobby Tillman happened. Law enforcement officials said that no drugs or alcohols were found on the scene and the police does not expect any more charges in this case. However, the media outlets reported that the suspects are supposed to be indicted in next two weeks.

LONDON - A flock of flamingos in Mexico has been photographed forming the shape of a big flamingo. P...

LOS ANGELES, (GaeaTimes.com)- We all know that Larry Forgione is one of the best cooks in the Un...

MELBOURNE - Amid the storm that hit Darwin yesterday, a woman was thrown across the room by li...

Bobby Jindal 'not interested' in running for president in 2012.

WASHINGTON - Bobby Jindal, the Indian origin Governor of Louisiana, has claimed that he is not inter...

Two get life for killing Indian-origin man in Britain

LONDON - Two men in Britain were jailed for life for the gruesome murder of an Indian-origin man dur...

WASHINGTON - The experience of 39-year-old Bobby Jindal, the Indian origin Governor of Louisiana, is...

WASHINGTON - Bobby Jindal, the Indian origin Governor of Louisiana, has used his new book to critic...
Copyright© 2010 The Gaea Times