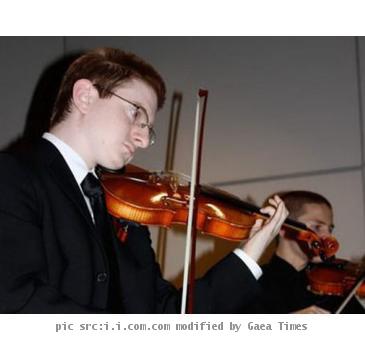 NEW BRUNSWICK (GaeaTimes.com)- Tyler Clementi, the first-year Rutgers University student who committed suicide by jumping off the George Washington bridge after his classmates streamed online videos of his sexual tryst with a man, was remembered by his fellow students at the university. A number of classmates of the 18-year-old student offered their last respects to Tyler Clementi by placing flowers, notes and photos at the memorial shrine that was set up at the university campus to offer their last respects to their deceased friend. The suicide of the teenager has already seized international attention and has raised many questions about cyber-bullying.

The students of Rutgers University observed “Black Friday” with many of them choosing to wear black to mark the day while the condolences kept pouring in from various quarters. Many of the notes that found a place in the memorial were addressed to Tyler Clementi’s parents and each of them expressed grief at the astounding loss that they had to endure. The family of the deceased teenager also released a statement which read that the support that they have received from family, friends and the entire community was extremely moving and humbling.

In the meanwhile, the Rutgers student’s two roommates Molly Wei and Dharun Ravi are both facing charges of invasion of privacy which might fetch them sentences of up to five years behind the bars. However, Middlesex County Prosecutor Bruce J. Kaplan has divulged to the media that the two accused might face additional charges under New Jersey’s hate-crimes laws. The prosecutor has emphasized that necessary steps would be taken to evaluate whether bias had a role to play in the incident.