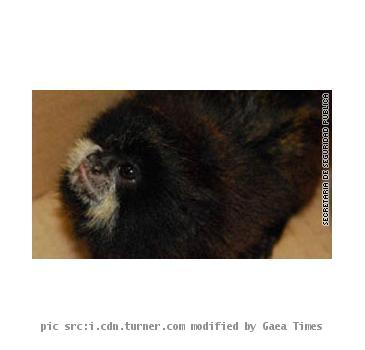 MEXICO (GaeaTimes.com)- In a recent development that has shocked the animal rights activists a man trying to transport 18 small titi monkeys hidden in his dress has been arrested at the international airport of Mexico City. The man named Roberto Sol Cabrera has been taken into police custody afar the tiny animals were found hidden in his dress. The animals were actually hidden in his luggage but in his bid to give the x ray machines at the airport a miss he hid them in his dress. However, his body language alerted the cops and his nervousness spelt doom for him.

The man hid the titi monkeys in his socks as well and the poor animals died of suffocation there. The cute looking titi monkeys are generally seen in South America and it is considered to be an endangered species. The man bought the monkeys in Peru as he said in the investigation. Thee monkeys are highly sought after ad sold at Mexico at steep costs. They can fetch a price of $1000 and more per animal.

In Mexico a lot of people keep wild animals as pets and in this regard the titi monkeys are valued a lot. 16 monkeys survived the ordeal and they have been rescued. He said in his interview that it was not his desire to cause any harm to the monkeys and he wanted to keep them as pets. The rescued monkeys were checked by vet and they are now doing well. It is not clear what sort of punishment would be given to the man.