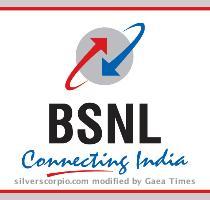 HYDERABAD, INDIA (GaeaTimes.com)- BSNL 1.4 crore pre-paid recharge coupon scam was busted by the police on Thursday. Reportedly, the police have taken two men under custody that includes a BSNL telecom officer. The telecom officer is P. Ramesh who works at the BSNL (Bharat Sanchar Nigam Limited) Bhavan. Along with him is the other man, U. Vijay happens to be a BSNL franchise owner called Panchajanya Enterprises.

The police told the media that it was way back in the year of 2009 when P. Ramesh picked up a total number of 26 CDs (Compact Discs) from a Adarsh Nagar store which contained a total number 1.3 lakh BSNL recharge numbers. The stealing act was a perfect one as P. Ramesh replaced all 26 CDs with blank discs. K. Lokanatha Rao, the store owner never suspected any scam or theft. Both P. Ramesh and U. Vijay printed the recharge cards for BSNL numbers from Bhagvathi Printers way back in Parel. They implanted the cards with the recharge numbers that they had derived from the BSNL CD’s and sold them to the retailers of Hyderabad and made a huge profit of Rs. 1.04 crore in a short span of seven months.

The Deputy Commissioner of police, Central Zone, Akun Sabharwal told the media that both P. Ramesh and U. Vijay divided the BSNL scam money among themselves with Ramesh taking a greater share of 70 lac and leaving the rest with U. Vijay. P. Ramesh utilized the money for the wedding of his son and daughter and also invested in real estate business. It was U. Vijay who confessed all about the BSNL scam to the police. In due course of the investigation the cops managed to retrieve a sum of Rs. 5.6 lakh in cash along with gold articles worth Rs. 3.2 lac.

Airtel 3G Services On The Anvil

DELHI, INDIA (GaeaTimes.com)- After Tata Docomo it is the turn of leading GSM services operator ...

NEW DELHI - India's GSM subscribers base grew 3 percent in October with the addition of 14.7 million...

NEW DELHI - Minister of State for Communication and Information Technology (IT) Sachin Pilot on Th...

BSNL 3G services to be in 760 cities by December (Lead, Superseding earlier story)

BSNL to expand 3G services to 120 more cities by December

BANGALORE - The Indian government will discuss a host of issues, including the outsourcing curbs, wi...