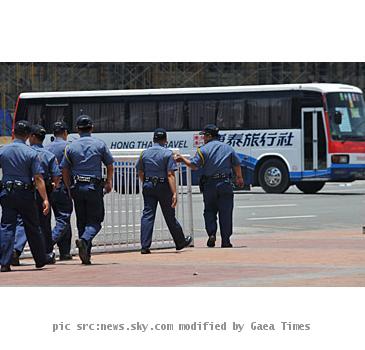 MANILA (GaeaTimes.com) — A bus with a group of tourists from Hong Kong was on a trip to Manila, where it got hijacked by a former senior inspector. Rolando Mendoza, armed with an M-16 took the hostage of the passenger as the bus reached central Manila park on Monday morning.

Reportedly, Mendoza, 55, was a senior inspector, who was fired from his job for extortion and forcing a chef to swallow “shabu”.

Initialy, the bus boarded 25 people. 22 of them are said to tourists from Hong Kong, 3 Filipions- a driver, a tourist guide and a photographer. A ninth hostage, a Filipino photographer has been freed as of now, leaving still 16 people in the fateful bus.

Previously, eight passengers including three children and a Filipino translator have been released by the angry ex-policeman, who is demanding authorities to withheld his name from the blacklist and be reinstated to the service.

Food and water have been supplied to the remaining passengers inside the bus from outside. The abductor has demanded constant supply of fuel to keep the air condition on during the scorching heat.

Meanwhile, Philippine President Benigno Aquino III has appealed to Mendoza to “honor and respect” the lives of hostages.

Mendoza’s brother, Gregorio, is helping police out in negotiation with Mendoza. According to Gregorio, his brother was upset with what had happened to him and think that he was unjustly removed from his job.