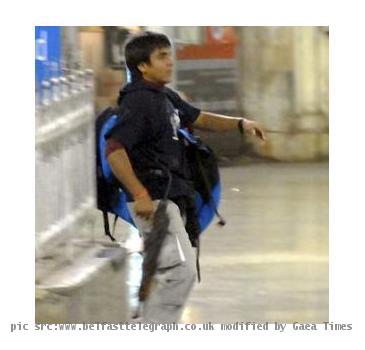 MUMBAI, INDIA (GaeaTimes.com) — Ajmal Amir Kasab, the Pakistani terrorist involved in 26/11 Mumbai attack has been given death sentence by Judge M L Tahaliyani. Kasab has been awarded death sentence on four counts and life imprisonment on five other counts by a special sessions court in the city today.

Ajmal Kasab, 22 is the lone surviving Pakistani gunman, convicted of killing 52 people in the 2008 terrorist attack on Mumbai. Kasab, along with nine militants attacked a railway station, two five-star hotels, a restaurant and a Jewish outreach center on the fateful day of 26/11. Close circuit camera caught Kasab firing innocent people with an automatic weapon at the railway station.

The judge M L Tahiliyani, while announcing the death sentence said words are not enough to describe the brutality of Mumbai attack. “This man has lost the right of getting humanitarian benefit,” he said. He had no other option but to give the death penalty.

Hearing the verdict Kasab broke into tear. He only nodded his head to say “no”, when the judge asked him to comment.

MUMBAI - With a view to bringing police services virtually to the doorstep of citizens, a Mumbai leg...

'Due diligence must before investing in global property markets'

NEW DELHI - The Indian sailing team, which won a silver medal in the match racing event at the ong...

MUMBAI - Builders in Maharashtra Tuesday asked the state government to remove discrepancies in the D...

'Kasab appears resigned to his fate'