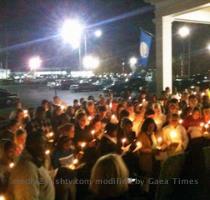 LOUISVILLE, (GaeaTimes.com)- Andrew Compton’s death once again reinstates the fact that how dangerous and even fatal internet dating could be. 18 year old Andrew Compton probably just wanted to have some fun with the man whom he found on the internet. But he turned out to be a predator, whose main aim was to target and harass young gay men and kill them.

Reports say that Andrew Compton and Gregory M. O’Bryan, met on an internet dating site. The Sullivan University student was last seen on October 28, when he apparently went on a dating with the 40 year old man at the Sullivan’s Gardiner Point Residence Hall. After that he went missing. The police have declared the boy dead yesterday. However, Gregory M. O’Bryan was arrested yesterday and he said that after the two met, they went to buy alcohol, and then headed towards the boy’s apartment, where they had sex. He said that he has no clue about what happened to the boy after he left the place. However, on a second interrogation he changed his mind and said that Andrew Compton was dead while they were having sex, and he got intimate with his dead body. After that he threw him in a dustbin near his apartment. The police charged the man with murder, tampering with physical evidence and abuse of a corpse. Gregory M. O’Bryan has been arrested with bail set at $1 million. He will be arraigned today.

All his friends from Carmel and Sullivan gathered at the university for a vigil. They commemorated Andrew Compton, who was a shy, introvert and a very thoughtful person. His body will be searched at the Rumpke Indiana Landfill in Medora today.

WASHINGTON - University of Cincinnati researchers may soon come up with low-cost, even disposable, e...

LONDON/BRISBANE - If England refuses to be daunted by life at the Gabba and avoids a meltdown like t...

WASHINGTON - Understanding how biological clocks adjust to having less sunlight in the winter could ...

Anderson has no intention of doing a Harmy repeat at Gabba